Aaron Ash, better known by his online alias Yamimash or Yami for short, is a British YouTuber who has played multiple games with Markiplier before. Both of them have played Gmod horror maps and a Slender multiplayer game, one of their most well known collaborations. On the channel, Yamimash was one of Mark's most loyal and greatest companions next to Bob, Wade and Jacksepticeye. Yamimash resides in Warwick, Coventry, England. Mark refers to his home as "Britonland".

Markiplier and Yamimash have played multiple games during their collaborations.

Markiplier and Yamimash have both played the multiplayer mode on both Slendytubbies games. Mark would play as a slendytubbie and lay out the tubbie custards to be collected while Yami would go around and he would try to collect them.

Markiplier and Yamimash had played on Gmod horror maps together as well. In Gmod, they would go around and see what horrors awaited them and at one point they did it wrong in one episode simply titled Garry's Mod Gone Wrong. Yamimash is the main guest in all of Mark's Gmod videos and appears in nearly every one of them except the Prop Hunt videos. He's most prominent on the GMOD Videos. 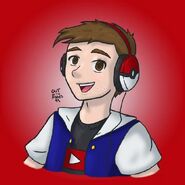