Jason Thomas "Tom" Fischbach[1] (born July 28, 1987), going by his middle name Thomas, is an American comic book author and artist known for creating the web comic Twokinds,[2] and is the elder brother of Mark Fischbach. As reiterated by Mark, Thomas does not like to be in front of a camera—The few times he is seen is due to Mark's pressing for his appearance.[4]

Jason Thomas Fischbach was born on July 28, 1987[2] in Massachusetts[3] to Cliffton Fischbach, a former U.S. Army officer of German descent, and Sunok, a native Korean who Cliffton met while stationed in South Korea. Two years later, after the birth of his younger brother, Mark Fischbach, the couple moved around for a short time before settling in a rural area in Milford, Ohio—a city within Cincinnati's greater metropolitan area—where they raised Thomas and Mark.[3][5] The house the two grew up in had a large backyard that led to nearby woods, where Thomas and Mark would often play as kids. Throughout early years, their parents would often argue with one another which later culminated in a divorce. After separating, the Fischbachs sold their family home and Thomas and Mark transferred from a private school to Milford High School due to a lack of funds.[6]

Thomas' interest in art piqued around the age of 14. He decided to start drawing after stumbling upon various web comics from a random internet search, the first one being Vet on the Net. The inspiration for writing Twokinds came from his own experience with racial discrimination from other students and teachers at his school, who were predominantly of European descent.[3] As he struggled to create a book for a year, Thomas opted for a web comic instead, feeling it was a better suit for his work. After honing his work for several years, Thomas published Twokinds on October 22, 2003.[2]

The comic, illustrated in a manga style, features anthropomorphic figures of varying races that traditionally do not trust each other learning to work together to achieve common goals. 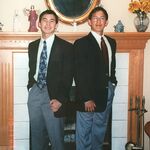 Thomas and Mark during their high school years

Thomas and Mark with their family dogs