James, better known by his online alias markiplierSINGSbadly (sometimes abbreviated as MSB), is a YouTuber that specializes in musical remixes of Markiplier's content. James jokingly describes the account as "the original Markiplier singing channel", containing various originally-produced songs, clips, montages and other forms of musical content made from videos originally created by Mark and, to a lesser extent, from other affiliated channels. Nearly all of the audio on the channel is originally produced by the channel director, who has mentioned that he has a day-job in the music industry.

The channel was created after Mark, in his playthrough of The Crooked Man, joked that he needed to create a special channel for his singing.

Initially mistaken for Mark's secondary account, James' channel became more prominent after Mark watched and referred to his 4, 5 and 6 million subscribers tribute songs. The goals for the channel are to create uplifting and funny content for Mark's fans through music, facilitate two-way interaction between fans and Mark, and to raise funds for charity. 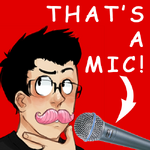 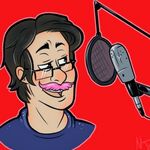 Second and current YouTube banner; the current one is a slightly edited version of Mark's original banner

Start a Discussion Discussions about MarkiplierSINGSbadly