This article is a stub. You can help Markiplier Wiki by expanding it.

Kathryn Knutsen used to work as video editor for Markiplier. She lives near Mark in Los Angeles and first started working for him around September of 2016. Kathryn is also personal friends with his girlfriend Amy Nelson.

Since she started working for Mark, Kathryn has appeared in numerous videos, most of which are live action. For example, in the series Markiplier Makes, she and Amy serve as the official judges for that episode's creations.

As of early 2018, Kathryn no longer works for Mark. 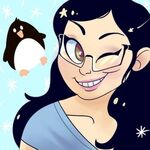