Jason Thomas Fischbach[1] (born July 28, 1987), known as Thomas or Tom, is a digital artist and is recognized as the creator and author of the popular web comic TwoKinds. He is also Mark Fischbach's elder brother. As reiterated by Mark, Tom does not like to be in front of a camera - the few times he is seen is due to Mark's pressing for his appearance for the sake of the audience. Despite this, he was featured as Mark has planned, albeit voice-only, in Mark's Orcs Must Die! 2 playthrough. He has made several small appearances in Mark's livestreams. 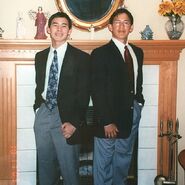 Add a photo to this gallery

Retrieved from "https://markiplier.fandom.com/wiki/Jason_Fischbach?oldid=59090"
Community content is available under CC-BY-SA unless otherwise noted.