Benny Fine and Rafi Fine, collectively known as the Fine Brothers or Fine Bros, are online producers and the owners of Fine Brothers Entertainment (FBE) that specializes in multitude of series, with "react" being the most prominent. They're personal friends of Markiplier, who has made multiple appearances on their channel. The reactors range between various generations, from youngest to oldest, and based on their social status, such as YouTubers and celebrities. The Fine Brothers also run a second channel called "REACT", in which they expand upon the reaction format. The two had a short-lived TV spin-off on Nickelodeon called React to That that lasted from December 15, 2014 to January 1, 2015.

On January 26th, 2016, the Fine Brothers released a video where they explained their plans to expand their channel and network into what they called "React World", by licensing the word "react" in order to try to patent the reaction video trend. The idea came under heavy fire and scrutiny as the concept would lead to people being fined and sued for their reaction videos. In less than a week, the channel lost more than 300,000 followers. At the time, there were numerous posts on social networks urging people to unsubscribe from their channel. Their follow-up video on this subject had also been criticized for not properly addressing the problem at hand. A few days later, the two videos were removed from their channel, the trademarking was rescinded and React World was discontinued. On February 2nd, 2016, TheFineBros issued an apology.[3] 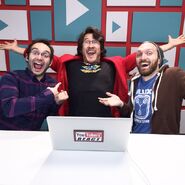 Mark with the FineBros
Add a photo to this gallery

Retrieved from "https://markiplier.fandom.com/wiki/Fine_Brothers?oldid=48507"
Community content is available under CC-BY-SA unless otherwise noted.