Cyndago is a retired YouTube channel prominently known for its satirical, comical and dark-themed sketches, numerous music videos and in particular their collaborations with Markiplier. The group was established in December of 2012 by Ryan Magee and Daniel Kyre. Following their move to Los Angeles, they were joined by a third member, Matt Watson from Kids w/ Problems, who assumed most of the editing duties to allow the others to focus more on creating content. The channel ended in September of 2015 after the tragic passing of Daniel Kyre. The final video was posted on October 11, 2015 to commemorate Daniel's life.

In late 2011, Ryan Magee had decided to start his first YouTube channel that would be dedicated to posting sketch comedy videos on a weekly basis. He posted numerous videos which were taken down over time, as Magee deemed them to be of poor quality. Some time after, Ryan asked for Daniel Kyre's help with one of their early collaborations dubbed Timely Travel, but was later deleted as well. Ryan asked a second time for Daniel's cooperation and the two, with the help from Grayson Beard, decided to make a music video titled Rodney the Frag Grenade, which was originally posted on Ryan's channel. Feeling that Kyre wasn't properly credited for his work, the two banded together and moved the video to their newly established shared account called Cyndago on December 17, 2012.[1]

Some time after establishing Cyndago, Daniel showed Ryan a few of Markiplier's Let's Play videos and the duo messaged him about being a possible narrator for their horror-comedy sketch Danger in Fiction, to which Mark happily agreed to. The group developed friendship and a working relationship over time, as they had frequently collaborated with each other. Mark flew them to Los Angeles for a full-week experience, before they decided to permanently move to L.A. to pursue their YouTube career.[2] Around August 2015, Cyndago was joined by a third member, Matt Watson, who acted as the main editor for Markiplier and was a prominent figure on Cyndago.

Cyndago's prominently known for their satirical, dark-themed sketch comedies and music videos that poked fun or presented an exaggerated form of some of the better-known subjects. Such topics include popular mediums, prominent figures, groups and companies, tropes, etc. Their later videos also consisted of vlogs, behind the scenes and challenges.

One of the most well known crossovers is the Danger In Fiction videos that showed the Darkiplier persona in action. In the videos Markiplier was a person simply known as "The Host" and he would abduct specific individuals and he would force them to comply in "stories" that he'd written and they would reenactment in live action.

In a short miniseries known as the Affair, Markiplier was his alter-ego Wilford Warfstache and got into an affair which ended in many people getting killed and the house being burnt down. Two cops now chase after Warfstache and must catch him.

Other prominent videos include Electronic Farts, where the group pokes fun at EA's controversies and Hire My Ass, a game show that would pin the contestants against each other in extreme situations for a potential job opening.

A total of 14 podcast episodes that last between 40 and 70 minutes were recorded and are available on Cyndago's section of libsyn podcast network. The topics usually revolve around comical situations, their daily experience and updates with occasional guests.

On September 19, 2015, Ryan posted on the Cyndago Facebook page that Daniel had attempted suicide and was taken to the hospital, but suffered irreversible brain damage. He was taken off of life support on Friday, September 18, 2015. Surrounded by his family, Daniel passed away in peace.[3] Ryan confirmed that Cyndago will not be continuing and concluded with a vlog post recapping their adventures throughout the years. On October 11, 2015, Ryan posted a final tribute video in honor of his late friend. Mark's Depression and Bipolar Support Alliance charity livestream was dedicated to Daniel.

After some time, Ryan and Matt continued with their sketch comedy over on Kids w/ Problems and later founded SuperMega, a channel dedicated to gaming commentary, podcast and occasional live-action videos.

Ryan and Daniel at one of their sets 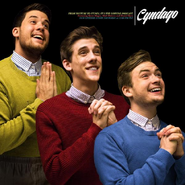