Amy Nelson, also known online as Peebles, is a graphic designer and animator from Cincinnati, Ohio who currently lives in an apartment in Los Angeles with friends.

From what is known, Amy started dating Mark Fischbach in late 2015 where she made her first official appearance when she accompanied Mark to VidCon 2016, which led to speculation that she and Mark were dating. Amy later confirmed this on Twitter with a picture of her and Mark captioned "oh jeez", later on replying to that same tweet with "what more do you want from us heck".

Amy's first official appearance on Markiplier's channel was in "DON'T LAUGH CHALLENGE #5". Amy has made numerous appearances in Mark's videos since then, namely in live action videos. Amy and her friend Kathryn Knutsen (who was one of Mark's editors up until early 2018) serve as the official judges of Mark's live action series Markiplier Makes.

Amy is almost always behind the camera of live action Markiplier videos and continued this role during the time that Unus Annus was active. In this time, her editing developed and she edited a good portion of Unus Annus videos. 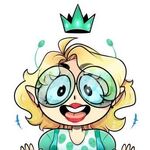 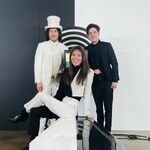 Promotional image of Mark, Ethan and Amy on the set of their 12-hour finale livestream